Fathom is simple enough, but it's actually got a lot of my design philosophy packed into it. I'd like to go into detail on each of these points eventually, but for now I think it's worth just getting the broad brush strokes out here. So, in no particular order:

Make it fun, inviting, and safe to explore… eliminate click friction; make it easier to just try something than it is to think about whether you should.

Rather than completely passive (like Pandora) or completely active (like Amazon), you get to choose and fluidly slide between levels of involvement.

By using APIs, I can focus on my strength (user interface) without having to build up all of the required data ahead of time. Also, by being connected to those other sites, we become just a little entwined… no website is an island anymore. This approach has its challenges, of course, but I feel it's worth exploring.

The interface scales to fit your window, however big or small.

The content is the interface, as much as possible. Controls appear when needed and disappear when not.

Animation is used to explain what's going on… you see where things are going to and coming from.

Focus on albums, rather than tracks.

Promoting album cover art and reconnecting it with the music in people's minds.

Minimize unnecessary clicks; for instance, you don't have to click an extra “play” after selecting an album.

An album's “neighborhood” of related albums gives it context… you start to get a sense for the space.

Having new albums come in with every move keeps things fresh and gives a game-like exploration feel.

Music is right-brain; your interface shouldn't be left-brain classics like the spreadsheet (iTunes) or huge pages of text (Amazon).

Of course Fathom is just one possible expression of these ideas. I look forward to future explorations along these lines. What do you think? Did I miss any? Are there other good examples of these principles out there?

Time for today’s math lesson! How are the geometric concepts of intersection and union applicable to your daily life? To discuss this fine topic, we'll use our old friend, the Venn diagram: 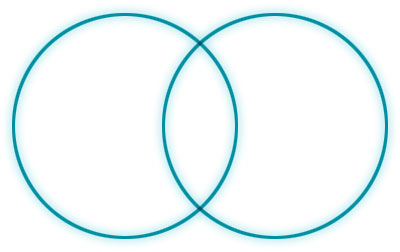 That bit where the two circles overlap is called the intersection: 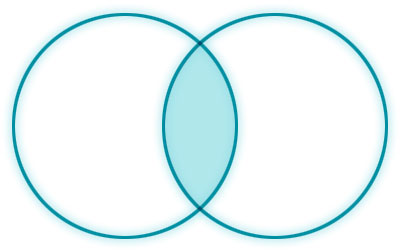 The entirety of both circles together is called the union: 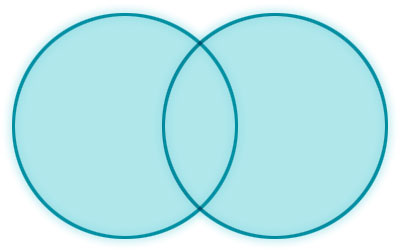 Pretty basic stuff. Remarkable how few people seem to get how it applies to them, however. Let's take business: When I was at Microsoft, we were constantly being told, “You can't do that, you’ll step on the toes of one of the other divisions,” or, “Helping our customers in that way would also be helping our competitors.” The idea was that no part of the company should do anything that might interfere with what some other part of the company was trying to do. All the different parts should make the other parts work better. There are all sorts of great buzzwords for this, like “synergy” and “better together”. On the face of it, it all sounds like common sense… don't get in your own way, help yourself out. The problem is, when you think that way, you end up with only the intersection of your business initiatives, only the areas where one helps the others:

… and every new initiative you have, that intersection gets smaller: 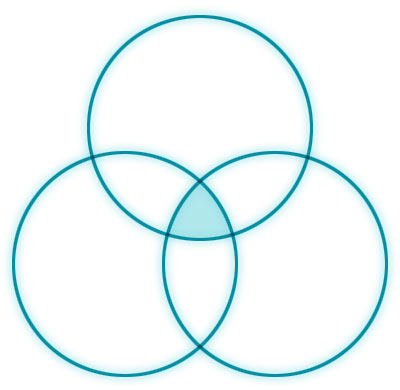 … but this is business, ruled by bigger, better, more! What you really want is everything, the union: 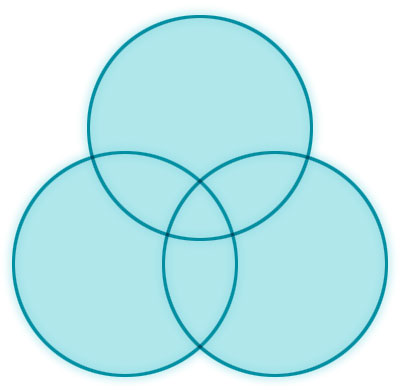 If one department steps on the other’s toes, it’s okay, because the whole pie is so much larger.

This doesn't just apply to business, of course. Let's say you're dating someone. Here’s a diagram of your movie tastes as a couple:

… and now it’s time to pick out a movie to watch together. Should you go for the intersection (where your tastes overlap), or the union (where at least one of you is interested)?

It comes down to how long you're together. If this is your first date, you’d better stick to the intersection, so you know everyone's happy. If you're going to stay together for years, though, you need to start venturing out into the union… otherwise, not only will you not see as many of the kinds of movies you like, you also won't get the opportunity to discover new things you might like outside of your comfort zone. For a marriage to survive, you need to be able to keep reinventing yourselves together, and that means trying new things.

The timing factor applies to companies as well: if you're a startup, everybody needs to be focused on one thing so you can move quickly. That puts you right in the middle of the intersection. Once the company has a chance to mature, however, sticking to the intersection means stagnation, which means death, or at least irrelevance.

Whether you're a person, a marriage, or a company, long-term survival depends on periodic reinvention. Look to the union of your interests, and you'll always find it.